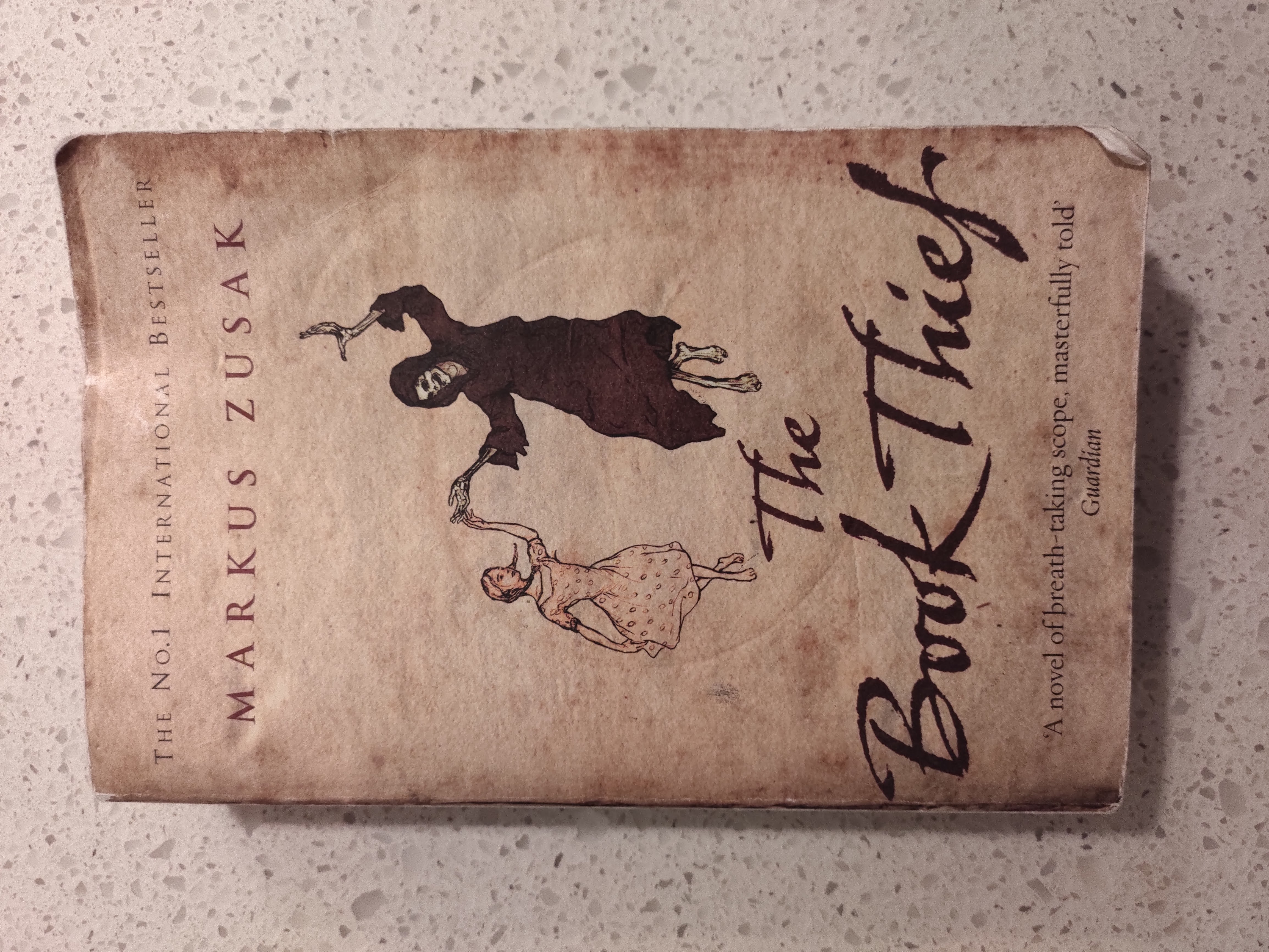 I've never really been one for historical literature. I've definitely been exposed to other WWII/Holocaust media and books, but it really wasn't a genre I went in for. I'm not sure why - on some reflection, I think I may have been putting up barriers to engaging with stories I knew were going to be sad. Still, Beth recommended I read The Book Thief. I don't think I actually read the blurb or realised when it was set when I started reading it, which may have helped me get into it a bit more.

I think the book broke me a bit.

I was about halfway through the book as we took our flight to move to Canada. It had already been a long day, and had just finished a movie, so I thought I would enjoy some chilled time reading The Book Thief. I was about halfway through, and, after about 10 days, not even at a particularly sad part, the whole concept of it all just hit me. The book so successfully humanised Max and made him real that the things that we were taught in school about the Holocaust and what happened in Nazi Germany weren't just unfathomable, incomprehensible numbers - they were real people who were scared, who suffered, who lost families, and who died. And of course I knew this before, but it's one thing to know it, and one thing to feel it, and for the thought to rock you enough to start crying on a packed plane to Canada.

The book in general, though: I loved the narration, I loved the slightly odd metaphors, I loved the style and presentation of the chapters and the interjections. The foreshadowing (or, more accurately, the direct mention of future events) was also very interesting; it stopped the book being tense, and stopped you wondering about who was going to die or what was going to happen, and instead led me to feel the moments.

The Book Thief appropriately now takes its place on my list of favourite books. For my emotional wellbeing, I think it will be a while before I read it again.

permalink | posted by nathan on Thursday, the 6th of January, 2022, whilst sipping tea in the morning

(I wrote most of this post on the 4th December, so it's being posted a bit late)

We finally moved! The last few days have been pretty long and busy, but we're getting sorted and settled. It's coming to the end of our 3rd full day here, and we've managed to get stocked up on food, get our Social Insurance Numbers, applied for healthcare, opened a bank account, a SIM card is on the way, and more. I also think we're beginning to get a feel for the area and how things work around here as well, which is nice.

It's been pretty tiring though! I've been fighting off a cold as well, which I think was made considerably worse by a 22 hour day including a 9 hour plane ride. That's not been fun, and I've had to balance feeling like I need to go bed early to recover with knowing I need to stay up a bit later to get over the jetlag. I'm feeling considerably better today though, which is nice.

The day we left was a very long and peculiar day. I'd woken up a bit of a coughy, phlegmy mess, and that only got worse as the day drew on. We left for the airport at 9:30, but not before frantically repacking the ski bags as I thought they might be considered overweight. 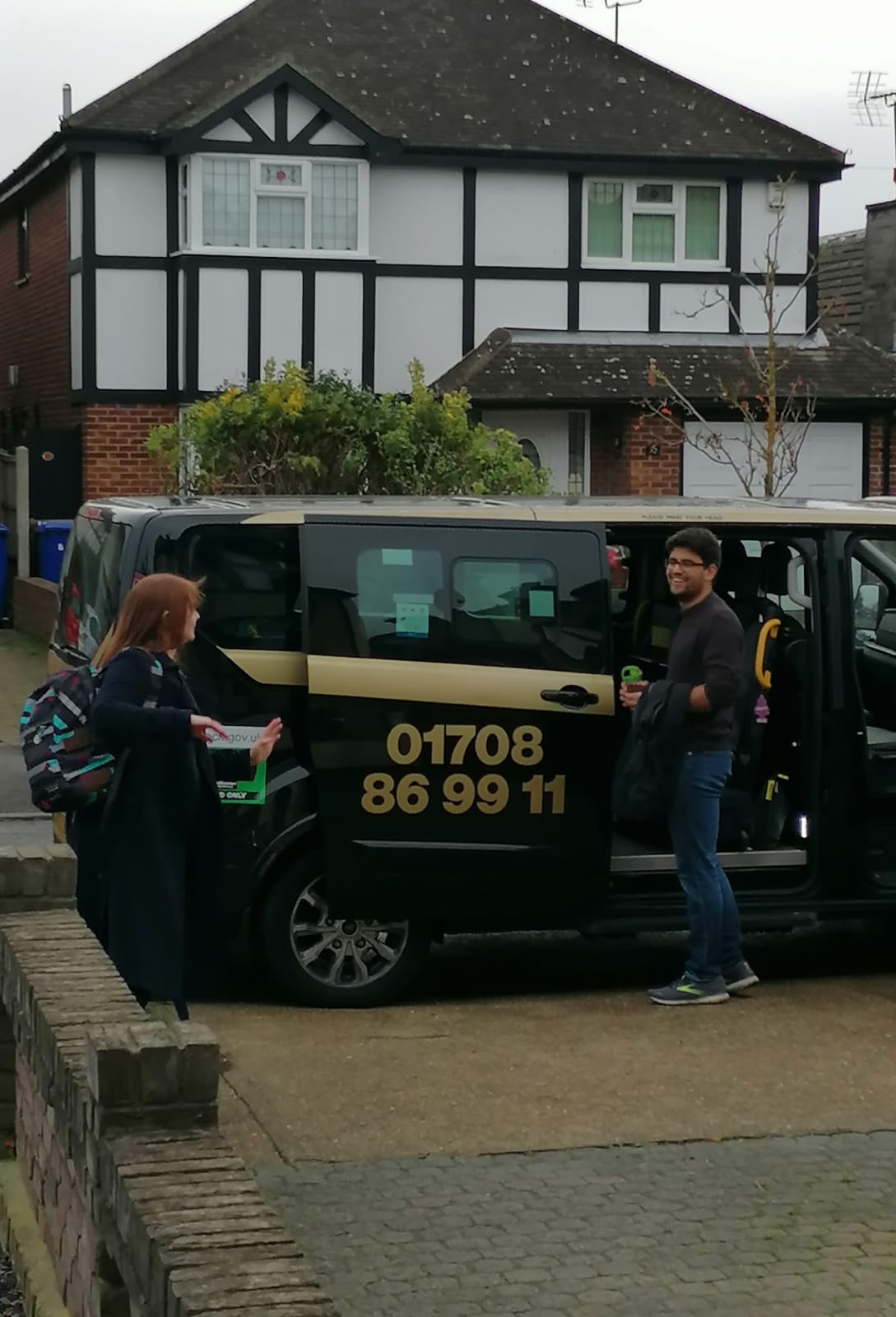 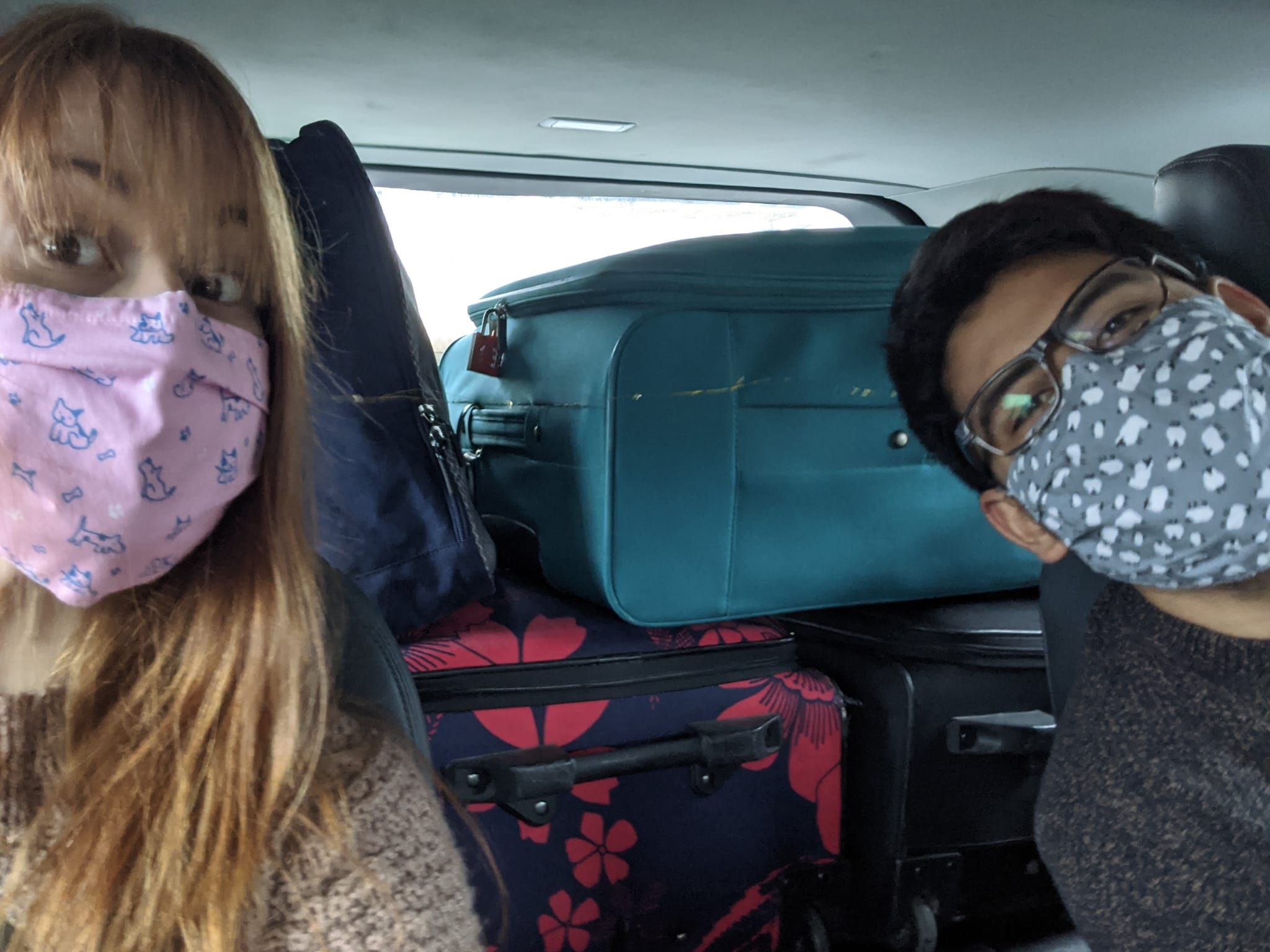 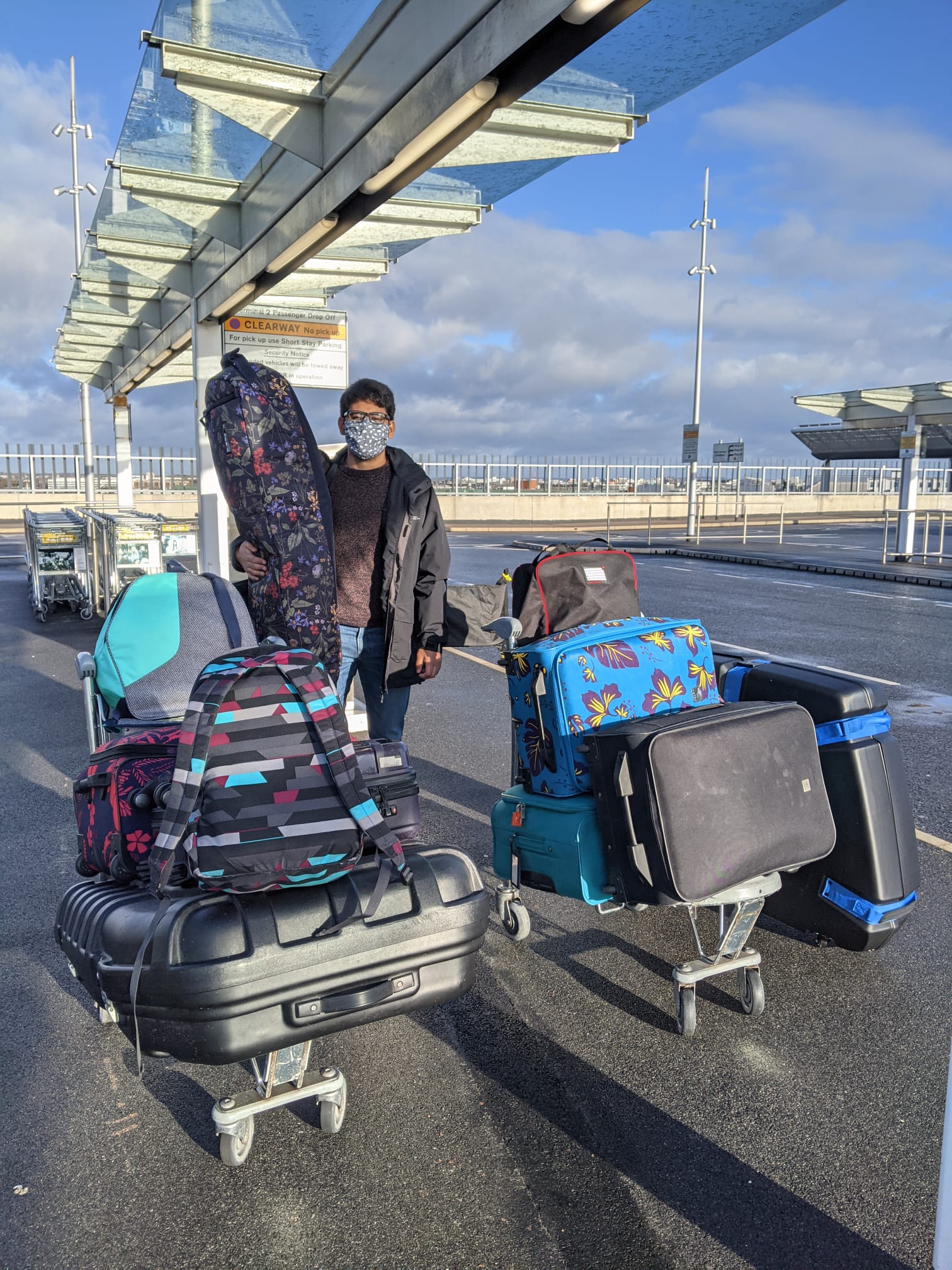 The amount of bags we brought was a little bit obscene:

Navigating it all through the airport to the baggage drop was an adventure, but we got there in the end. Luckily we had paid a bit extra for our ticket for an extra checked bag each, as it meant that we had access to the priority check in and could drop all our bags off quickly and without much fuss.

The plane journey itself was fairly uneventful, just 9 hours of sitting in a seat. We watched Shang Chi, which was pretty good. Classic Marvel flick. I also read a bit more of The Book Thief, which I am really enjoying. It's the first piece of WW2 literature/media that I'm really resonating with.

We landed, and immigration and customs were very straightforward. We got our work permit and picked up our bags and pretty much just walked out and got our minibus (which was way too big, but better safe than sorry!) into Vancouver for the first time.

At this point, it was about 6pm, which equates to 2am UK time. We felt like we had to stay up a bit later to start getting over the jetlag, so we fumbled around looking for somewhere to eat. The main issue is that we're staying in Yaletown, which is known for its upmarket culinary scene. We ended up at a very nice restaurant called The Flying Pig, which seems to focus on meat. After a 9 hour flight and feeling a bit sick and very tired, a large steak was the last thing I wanted, so I don't think we got the best side of the menu. 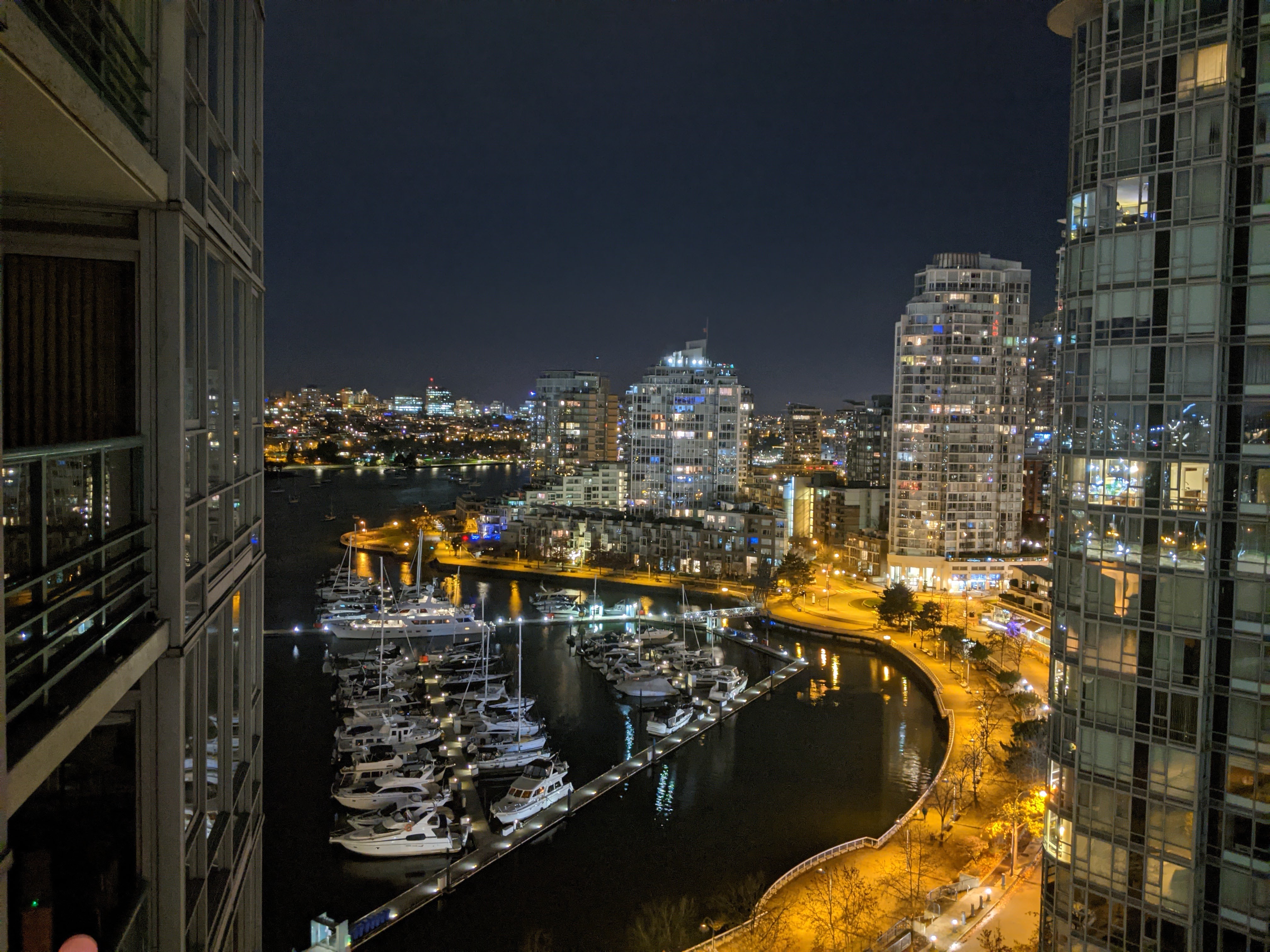 In the end we managed to stay up until 9pm, which I thought was pretty good going! The next day we grabbed breakfast/brunch at a OEB, a lovely place just down the road, facing out onto the marina. They did great eggs and I had a breakfast burrito. 🌯 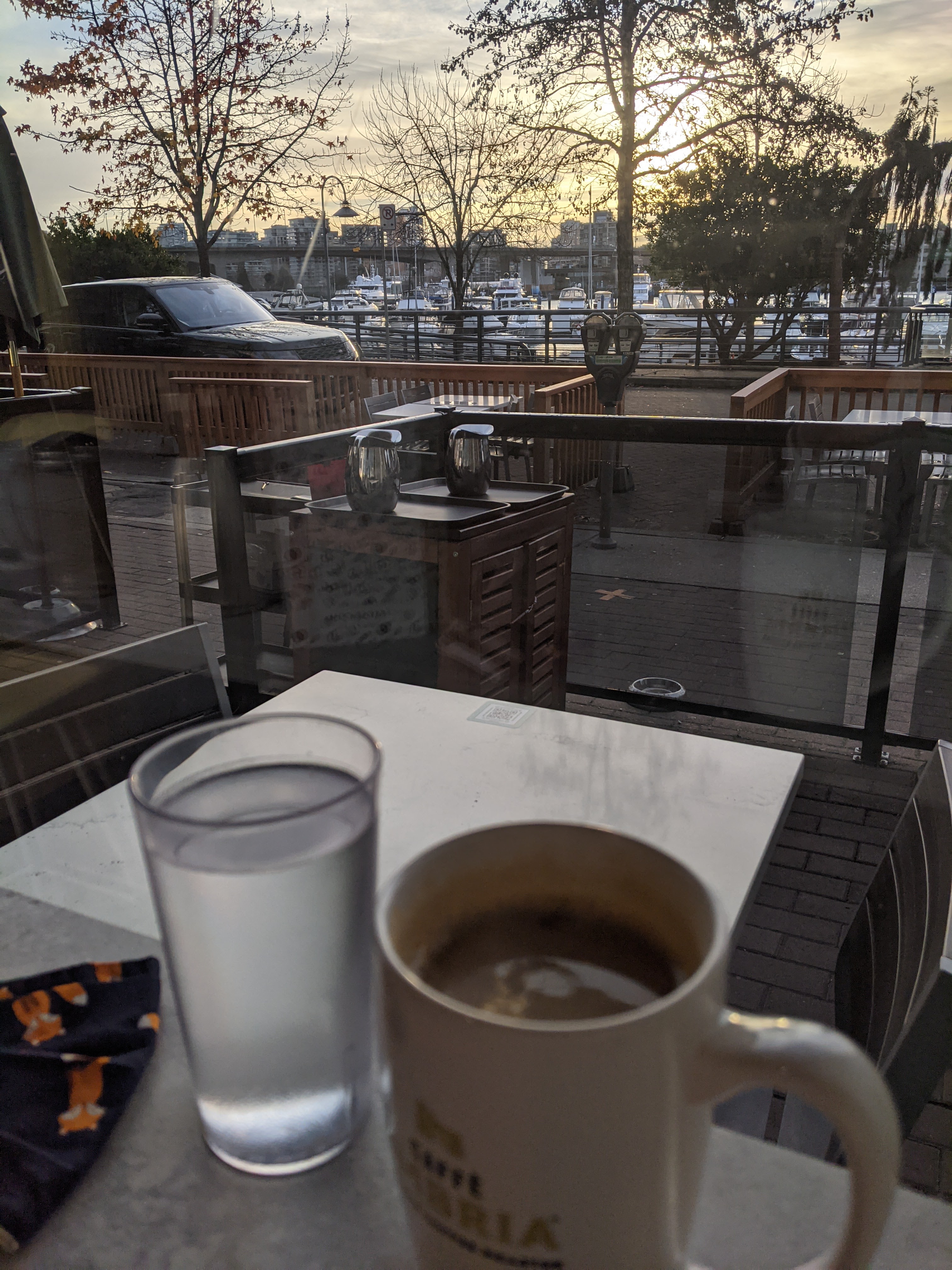 We took a walk to a supermarket via the sea wall along False Creek. We were thoroughly confused by the English Bay Barge (but now wholeheartedly love it), but the real star was the views of the mountains and the sea. 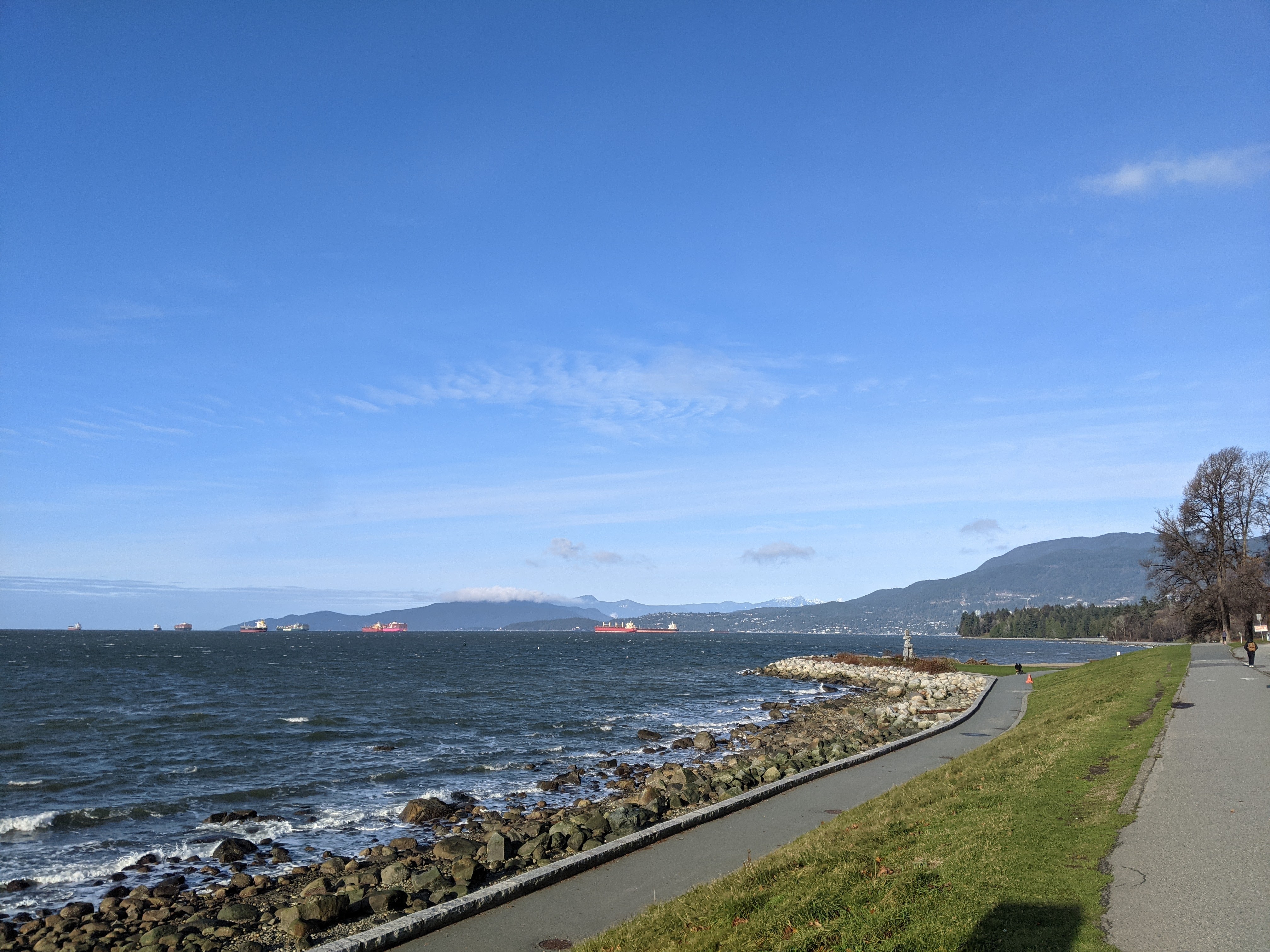 and that's all I got round to writing. The first few days in Vancouver have now been lost to my bad memory...

We definitely went shopping and were shocked at the prices on that first day. On the Friday we queued to get our SIN numbers, walked around Canada Place, got Tacos at Tacofino, and got an appointment to set up bank accounts. The next day I was feeling awful, and we stayed in and unpacked. 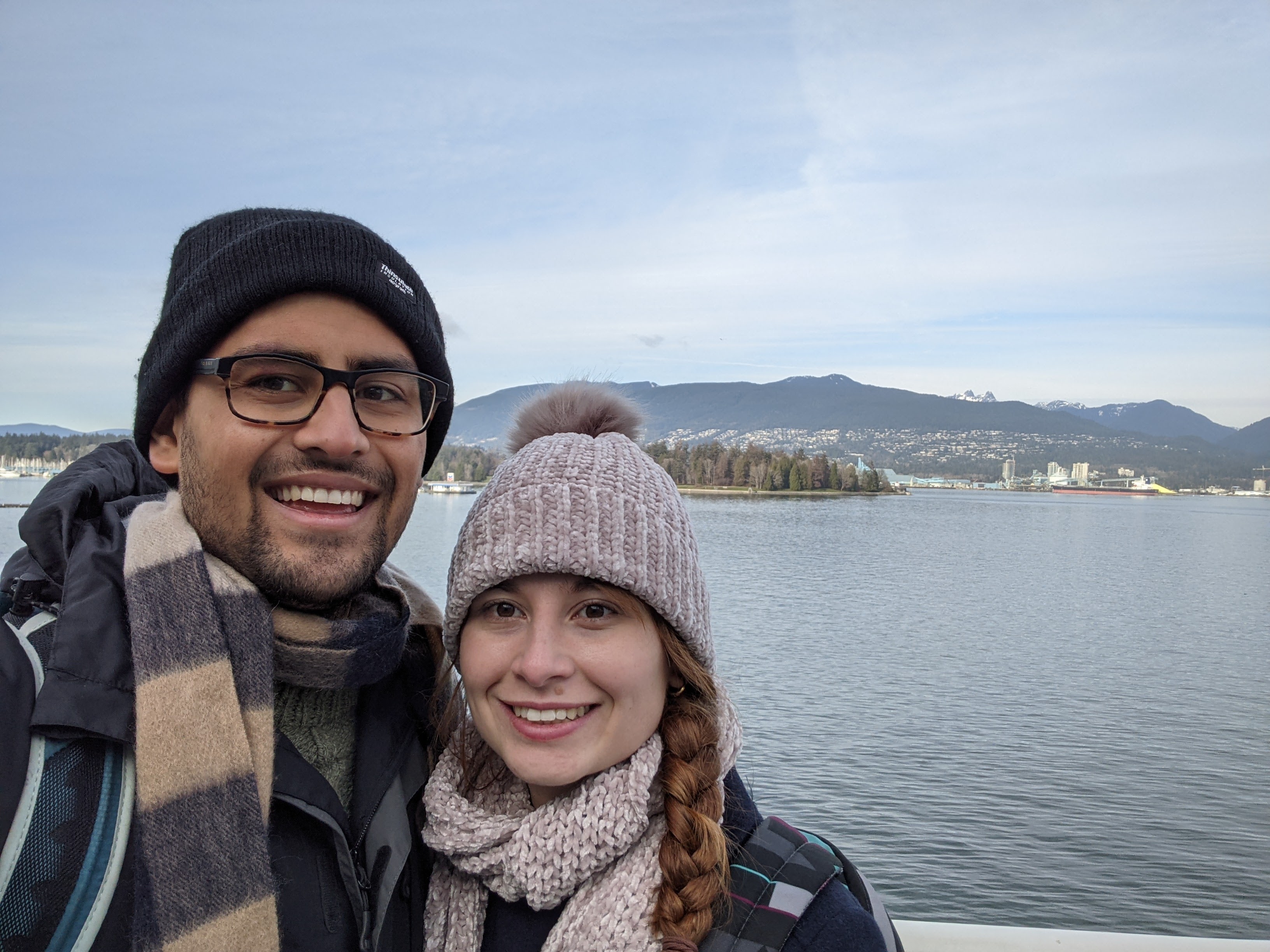 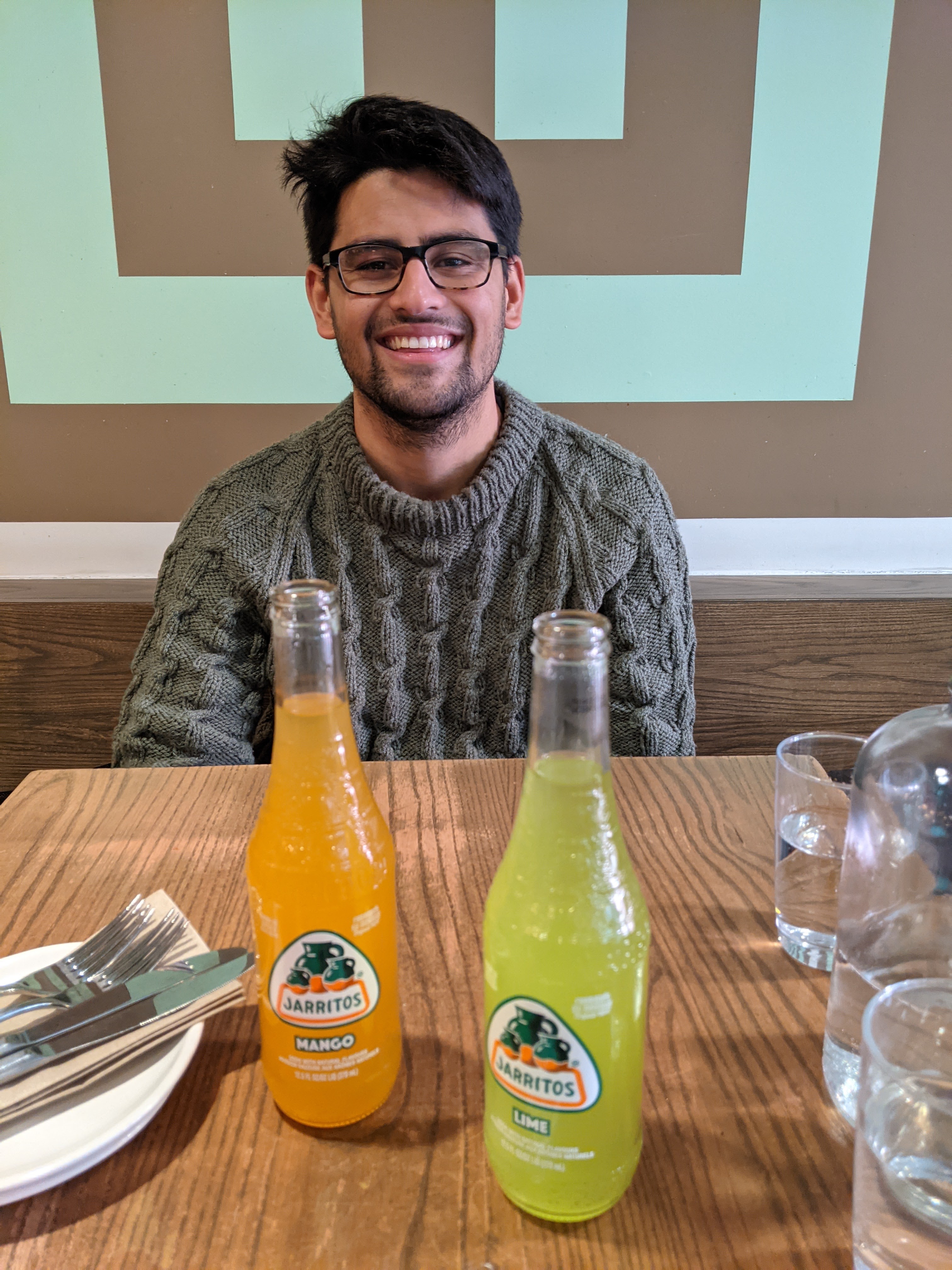 And on Sunday (which is as far as I'll go in this post), we decided the apartment wasn't Christmas-y enough and wanted some decorations. So naturally, we decided to DIY it and make some paper chains and snowflakes while watching Harry Potter. It was a good excuse to go for a wander around as well. 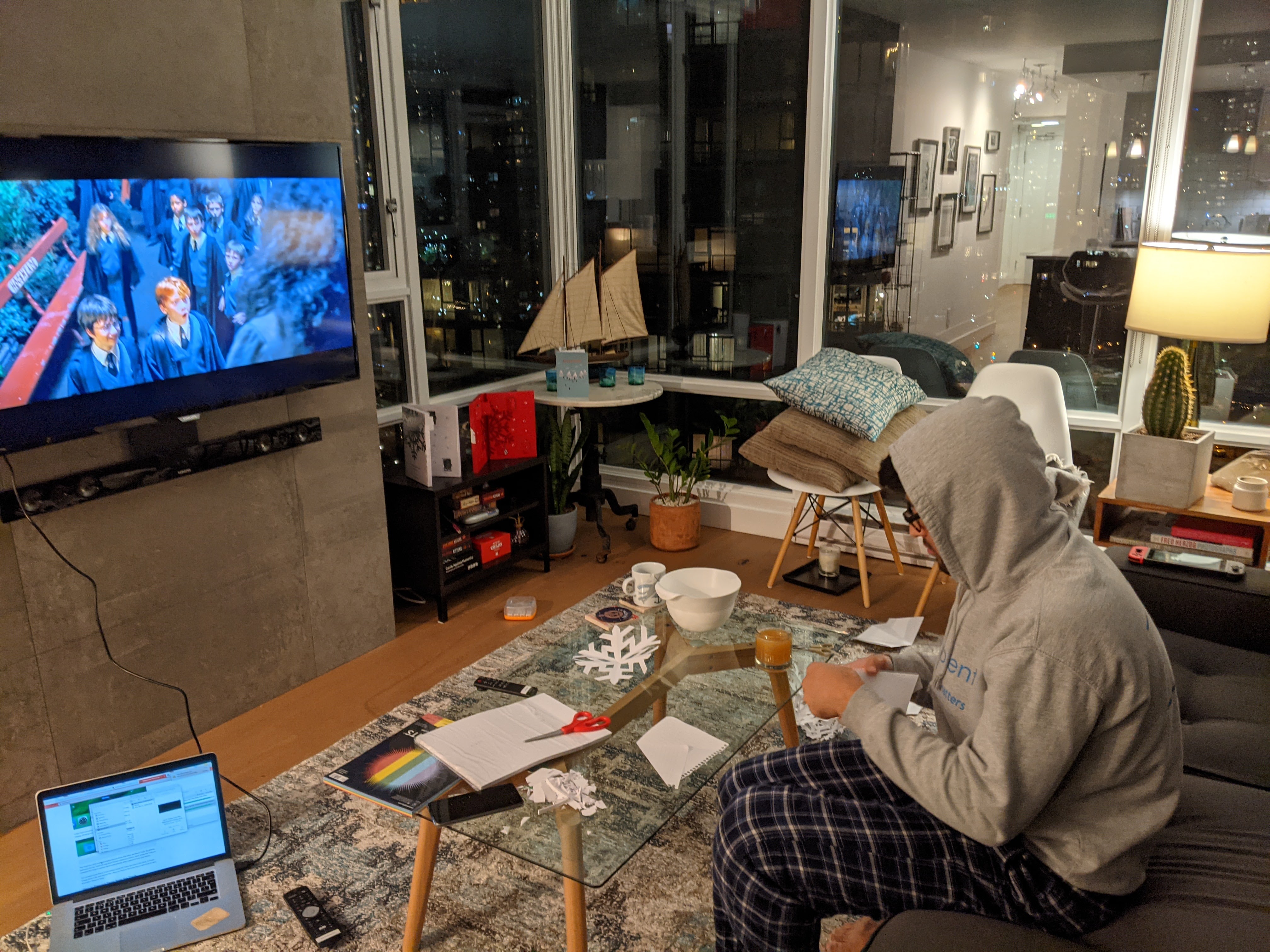 The first few days of getting settled and understanding everything feel so long ago now. There's so much we've got used to and understand better now, from groceries to how to navigate the city. It's been quite the adventure. 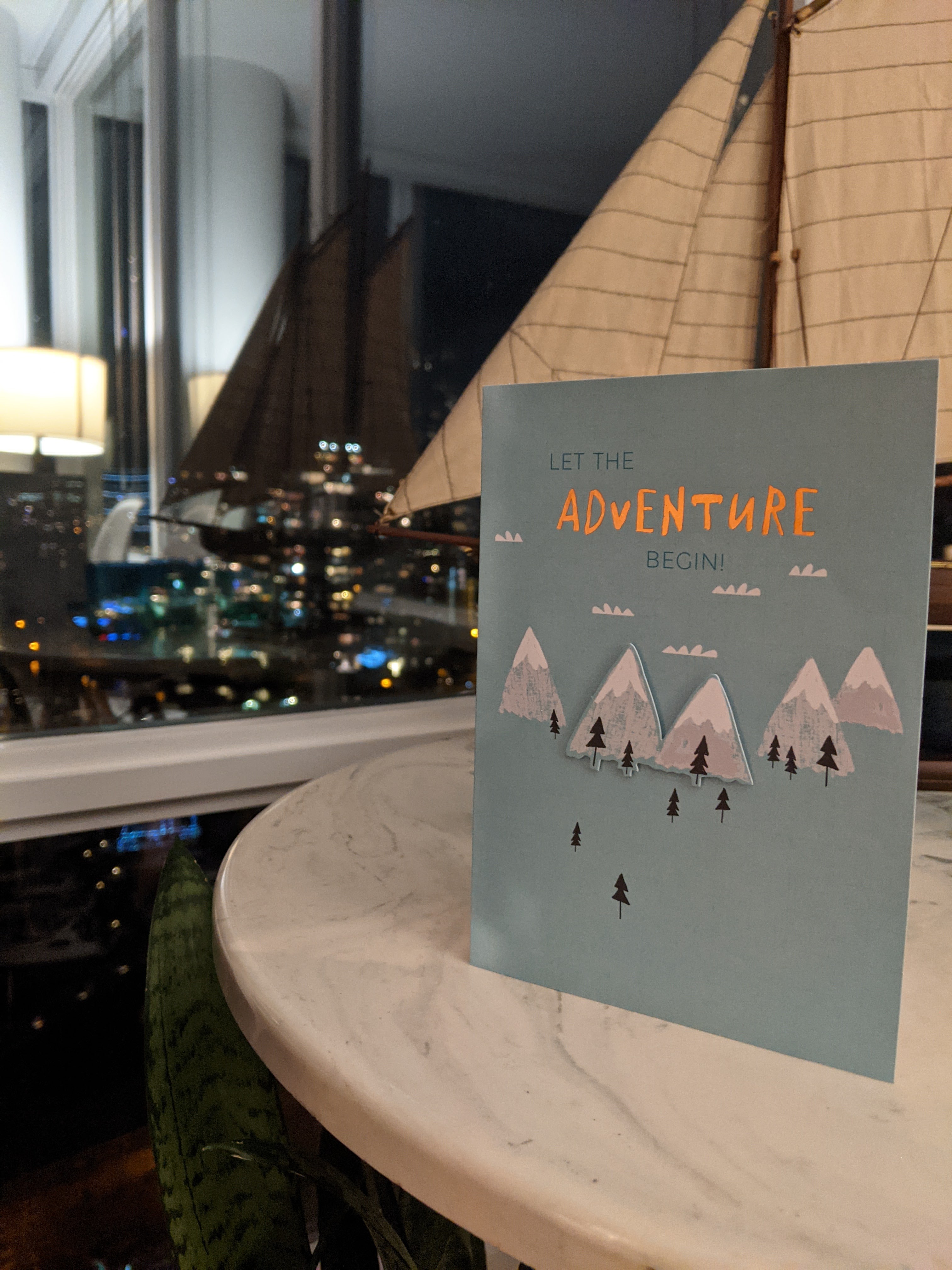 permalink | posted by nathan on Friday, the 31th of December, 2021, when he should have been sleeping

trying new things and not being grumpy

The long overdue Canada move update post is still pending, but I think it's been blocking me from writing anything. So - it is coming, but I've been thinking a lot recently (as I adapt to a new place and have to try new things) that I need to chill out about trying new things. It's not like I'm actively afraid of it, but I find often there's an activation energy to doing it that I struggle to get over. I think it's feeling like I need to be actively engaged in something new, which feels like effort, so I don't.

It also feels linked to how grumpy I've been finding myself recently. I don't think it's a lot, but it's more than I like. And again, I think it stems from feeling tired, and not wanting to put the effort in to being upbeat and engaging with things.

I watched Cinema Therapy's video on My Neighbour Totoro, and they talked a lot about the parenting from the father. The real point that stuck with me was how much time and energy he has for his daughters, and how that must take so much energy. I don't want to be a grumpy old dad who has no energy to play and be excited by his children! And if I'm finding myself low on energy and not engaging with things now, how am I going to do it when I'm older?

I think a few things help me: getting enough sleep and exercise (shock! horror!) and also an offline system for keeping lists of things I want to try. I think I'll have a think about how to do it, and then make it a resolution or a yearly theme.

permalink | posted by nathan on Thursday, the 23th of December, 2021, when he should have been sleeping

November has been a busy month! I keep trying to find time to write a post but I'm either tired or stressed or don't really have a clean update to post. Mostly because we are moving to Canada on the 1st December! It's finally happening! The last month or so has been a haze of quitting jobs, sorting visas, leaving parties, seeing people, etc. I feel pretty tired (although that might just be a small hangover from last night).

I don't think it helps that it doesn't really feel like I've had a routine recently, and I don't think that will change for a while. And with only a week and a half left, it feels like it's going to be stressful getting everything ready. Really though, the only big things left are

There are a few other small things (booking a taxi from Vancouver to our new flat, uploading details into ArriveCAN, and I'm sure other things I've forgotten), but given we're off work I don't think it will be too bad.

The other big thing, of course, has been seeing people before we go. Most people came to our leaving do, but there's still a few people to catch before we leave.

Moving halfway across the world takes a lot of effort, who'd have thought?!

I went to visit my parents last week as well, which was very enjoyable. It was a bit sad they were working, but it was nice to spend time with them nonetheless. It is quite sad to be moving away from friends and family. I knew I was going to miss people but I think it's going to be a bit worse than I thought...

In other less exciting news, we finally saw the new Bond (enjoyable) and I've been enjoying Bloc Party's Silent Alarm. I'd like to write more about both, but I'm just not feeling particularly up to it at the moment. Hopefully I'll be able to write about exciting Canada things soon though!

permalink | posted by nathan on Sunday, the 21th of November, 2021, during the most productive hours of the day

For the first time in almost two years, we went to see a film in the cinema! We had planned to see The French Dispatch, but it wasn't showing at the cinema we were going to. We also wanted to see the new Bond, but Beth hasn't seen all of the previous ones, and while probably not completely necessary, is something we want to finish anyway.

So we saw Dune instead. I really enjoyed it! The world seems a lot more interesting than many other sci-fi/fantasy worlds, with a fair amount of different ideas. It also doesn't try and justify its own internal logic too much; things are just the way they are, and that's that. I enjoyed the story as well - it twists and turns and travels to exciting places. My only worry is that Paul might get a bit too powerful and plot-armour-y, but we'll see.

I'm excited for the next movie - I might even give the book a try again.